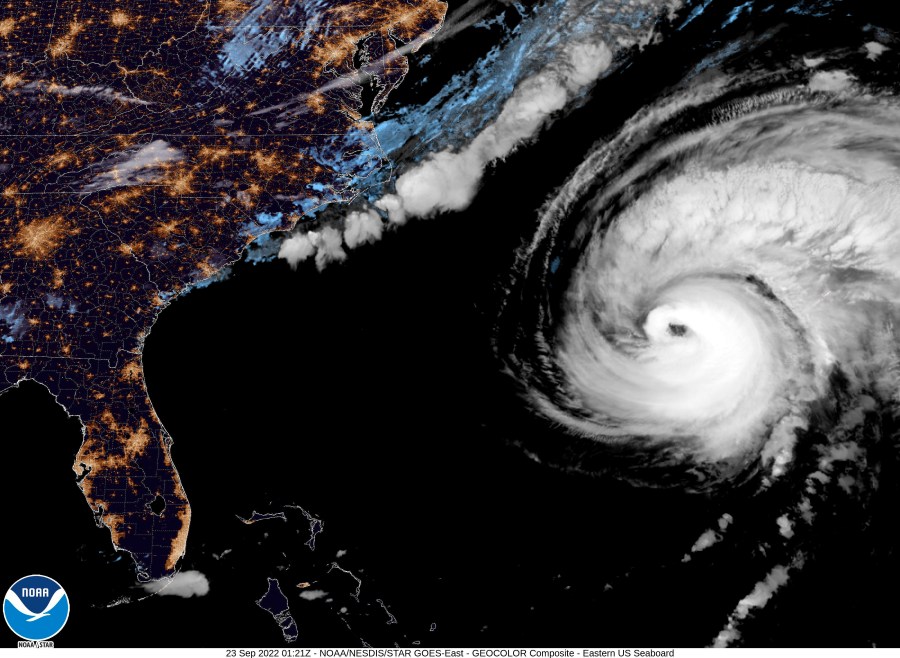 CAGUAS, Puerto Rico (AP) — A hurricane expected to become a massive post-tropical storm will bring gale-force winds, heavy rain and large waves to Atlantic Canada in what forecasters said Friday has the potential to be one of the more severe. storms in the history of the country.

Fiona is due to make landfall on Saturday morning. The Canadian Hurricane Center issued a hurricane watch for large coastal areas of Nova Scotia, Prince Edward Island and Newfoundland. The US National Hurricane Center said Fiona should hit the area as a “large and powerful post-tropical cyclone with hurricane-force winds.”

“When it goes down in the history books, we’ll have to make that determination after the fact, but it will certainly be an extreme historic event for eastern Canada,” said Bob Robichaud, warning preparedness meteorologist with the Canadian Hurricane Center.

Fiona, currently a Category 4, lashed Bermuda with heavy rain and strong winds on Friday as it passed the island on a track forecast to approach northeastern Canada. Bermuda authorities opened shelters and closed schools and offices before Fiona. Michael Weeks, the national security minister, said there were no reports of major damage.

Robichaud said the center of the storm is expected to reach Nova Scotia on Saturday morning sometime just before 9 a.m. local time, but winds and rain will arrive late on Friday.

“It certainly has the potential to be one of the most severe systems to hit eastern Canada,” said Ian Hubbard, a meteorologist with the Canadian Hurricane Center in Dartmouth, Nova Scotia.

Hurricanes in Canada are somewhat rare, in part because once storms reach cooler waters, they lose their main source of energy. and become extratropical. But those cyclones can still have hurricane-force winds, albeit with a cold core instead of a warm one and no visible eyes. Its shape may also be different. They lose their symmetrical shape and can look more like a comma.

A hurricane warning was in effect for Nova Scotia from Hubbards to Brule; Prince Edward Island; Island-of-the-Madeleine; and Newfoundland from Parson’s Pond to Francois. So far, Fiona has been blamed for at least five deaths: two in Puerto Rico, two in the Dominican Republic and one on the French island of Guadeloupe.

People across Atlantic Canada were stocking up on last-minute essentials and protecting their properties from storms on the Friday ahead of arrival.

Dave Buis, vice commodore of the Northern Yacht Club in north Sydney, Nova Scotia, said he is concerned about the storm, which is expected to hit Cape Breton Island.

“Oh definitely, I think this is going to be bad,” Buis said. “Hopefully, it will slow down when it gets to the cooler water, but it doesn’t look like it’s going to.”

He said he pulled his seven-meter sailboat out of the water on Thursday and moved it to a storage area behind the yacht club. Five other boat owners followed suit, while others in the club tied down their boats with additional lines.

Meanwhile, the National Hurricane Center said a tropical depression in the southern Caribbean is expected to hit Cuba early Tuesday as a hurricane and then hit southern Florida early Wednesday.

Before reaching Bermuda, Fiona caused severe flooding and devastation in Puerto Rico, prompting US President Joe Biden to say Thursday that the full force of the federal government is ready to help the territory of the United States recovers.

Biden noted that hundreds of FEMA officials and other federal officials are already in Puerto Rico, where Fiona caused an island-wide blackout.

More than 60% of power customers remained without power Thursday, though efforts were underway to restore power. Many customers were left without water, while local officials said they could not say when service would be fully restored.

As of Friday, hundreds of people in Puerto Rico remained isolated by blocked roads five days after the hurricane hit the island.

At least five landslides covered the narrow road to their community in the steep mountains around the northern city of Caguas. The only way to reach the settlement was to climb over the thick mounds of mud, rocks and debris left behind by Fiona, whose floodwaters shook the foundations of nearby houses with the force of an earthquake.

At least eight of the 11 communities in Caguas were completely isolated, said Luis González, municipal recovery and reconstruction inspector.

It was one of at least six municipalities where crews had yet to reach some areas. People there often rely on neighbors for help, as happened after Hurricane Maria, a Category 4 storm in 2017 that killed nearly 3,000 people.